The name “La Vasca” is simply taken from the past with which all the citizens of Morciano always recognized and called the mill and the date “1562” taken from the epigraph located on the entrance door of the structure itself. The Latin phrase “NECTE QVESIERIS EXTRA (And don’t look for yourself outside) 1562” present on the external wall of the building on the trilobed arch has an extremely current meaning, inviting people not to be influenced by the opinion of others, when this is not adequately motivated and don’t underestimate yourself.

The structure is located between two religious entities, on one side the Mother Church of San Giovanni Elemosiniere dating back to the early 1500s, but certainly built on a pre-existing building, and on the other the Carmelite Convent also dating back to the early years of 1500. In the beginning “La Tub” was undoubtedly managed by the religious as a hospital intended as a shelter for the needy, the sick, the poor and pilgrims who went to Santa Maria di Leuca and offered them shelter and meal as a last stop at par. of a modern hotel. 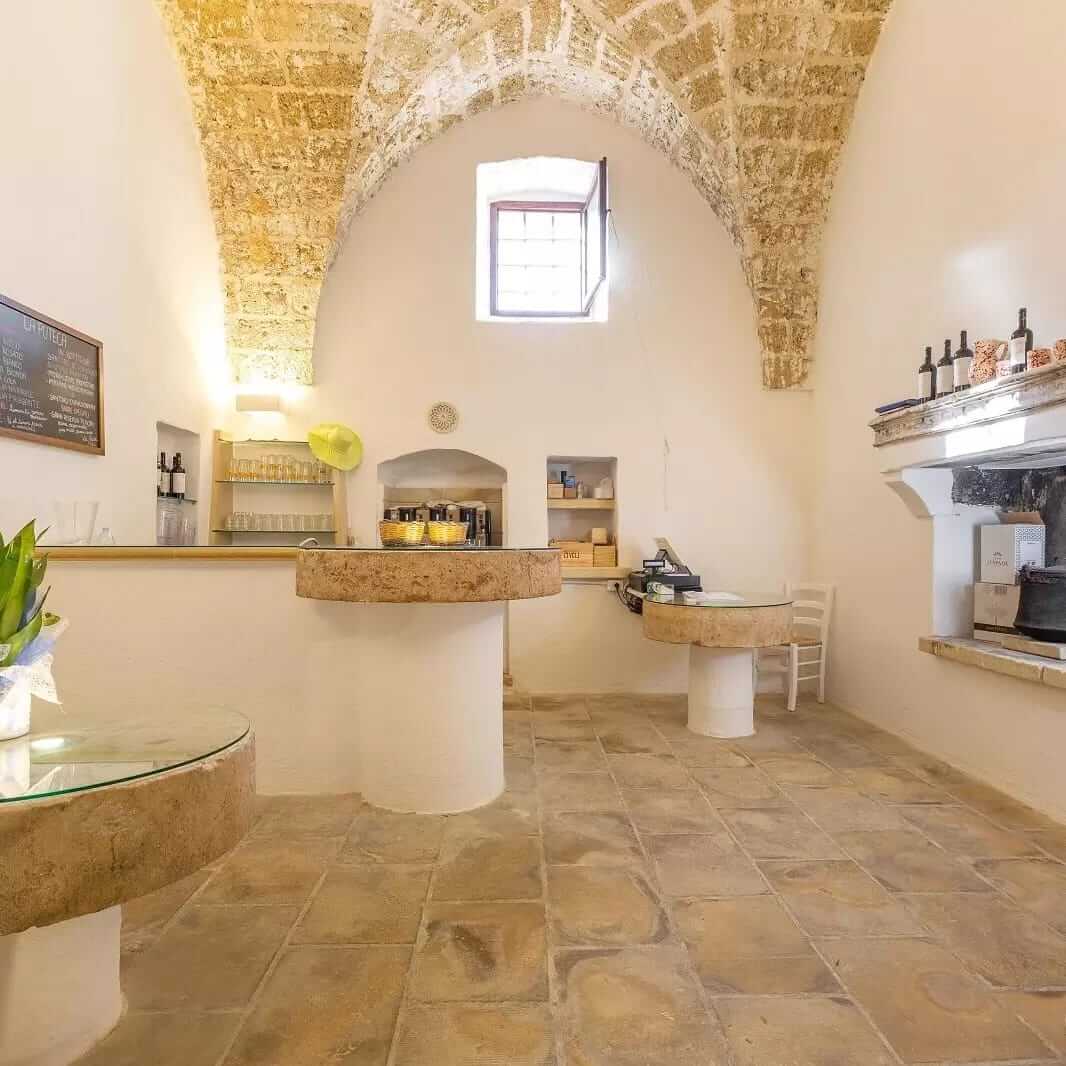 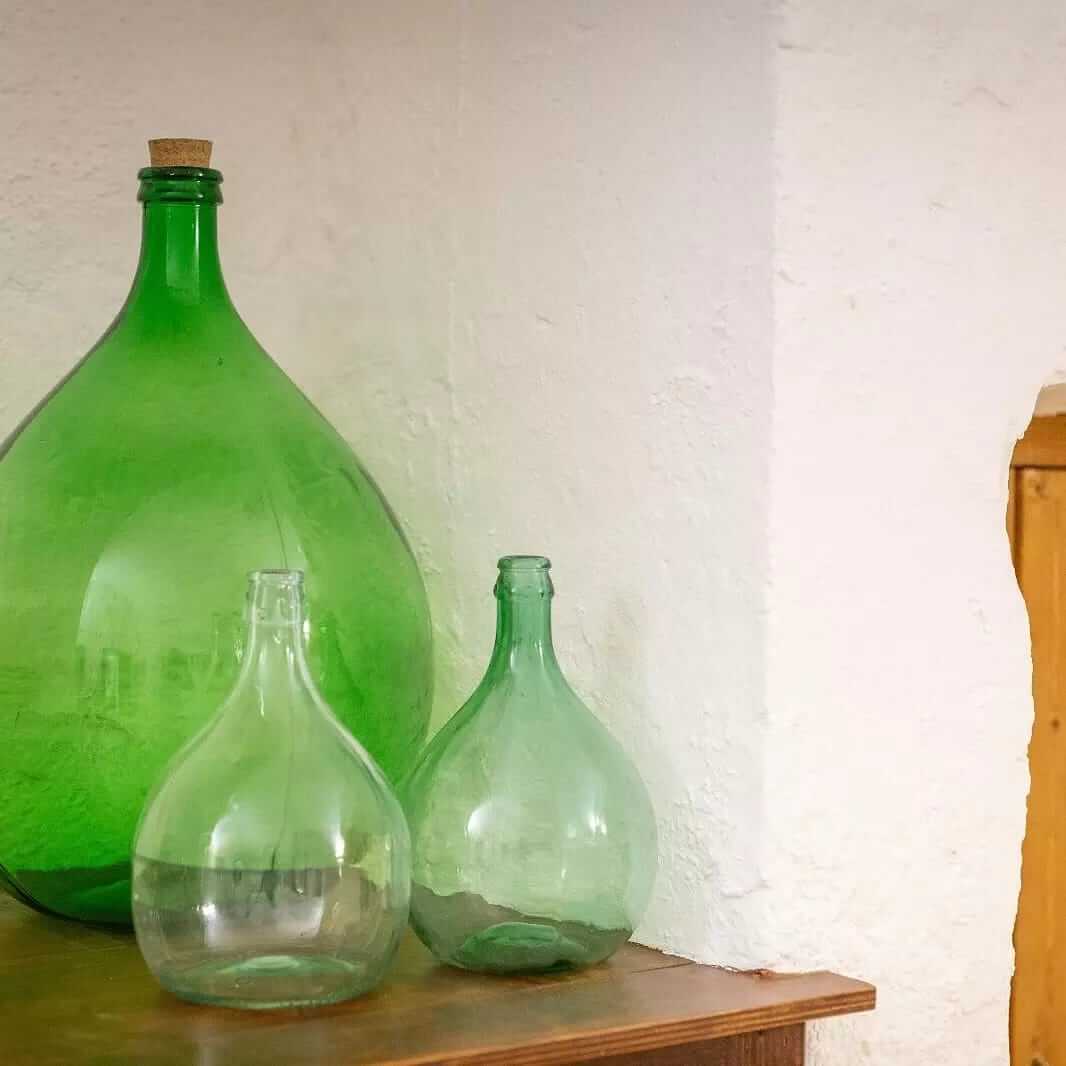 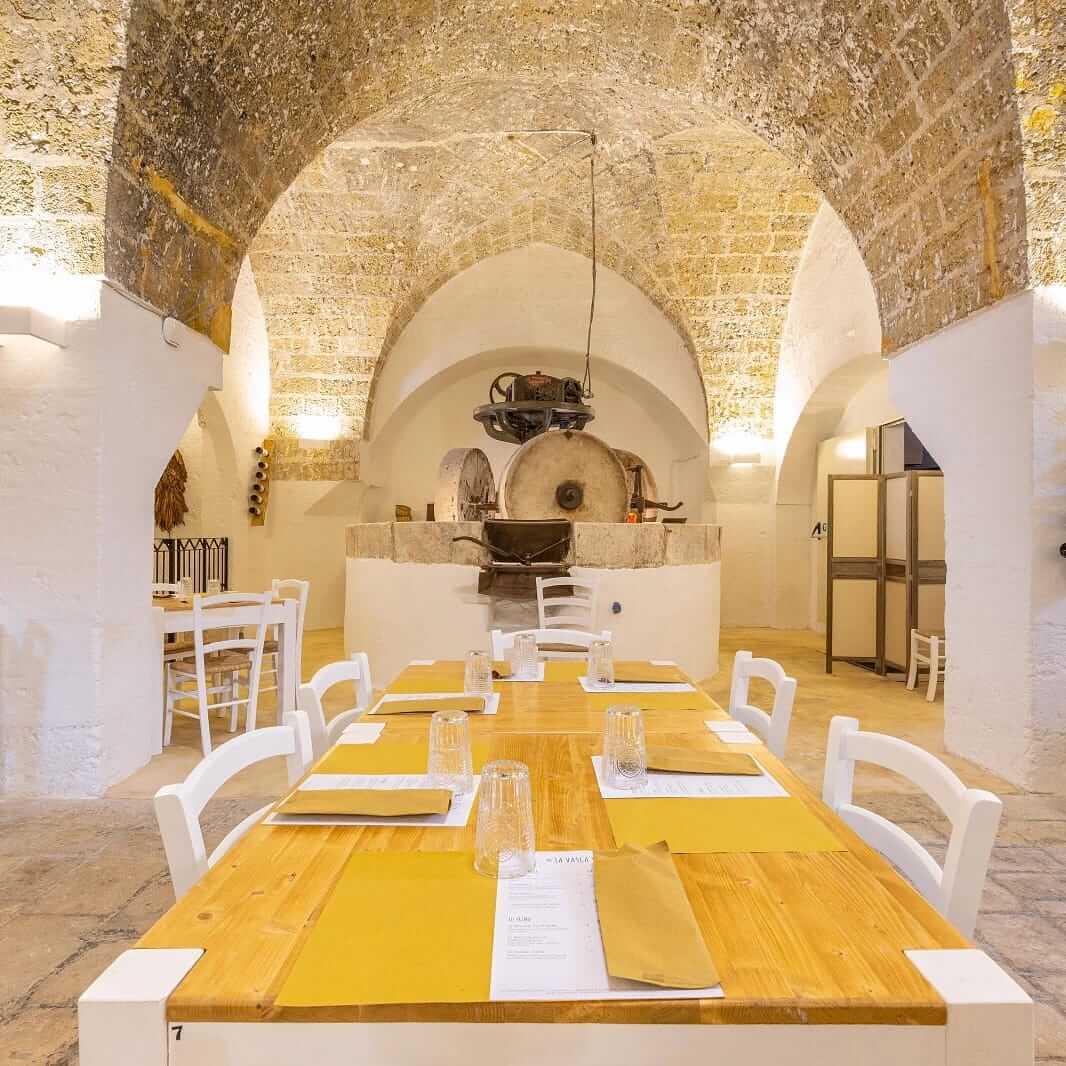 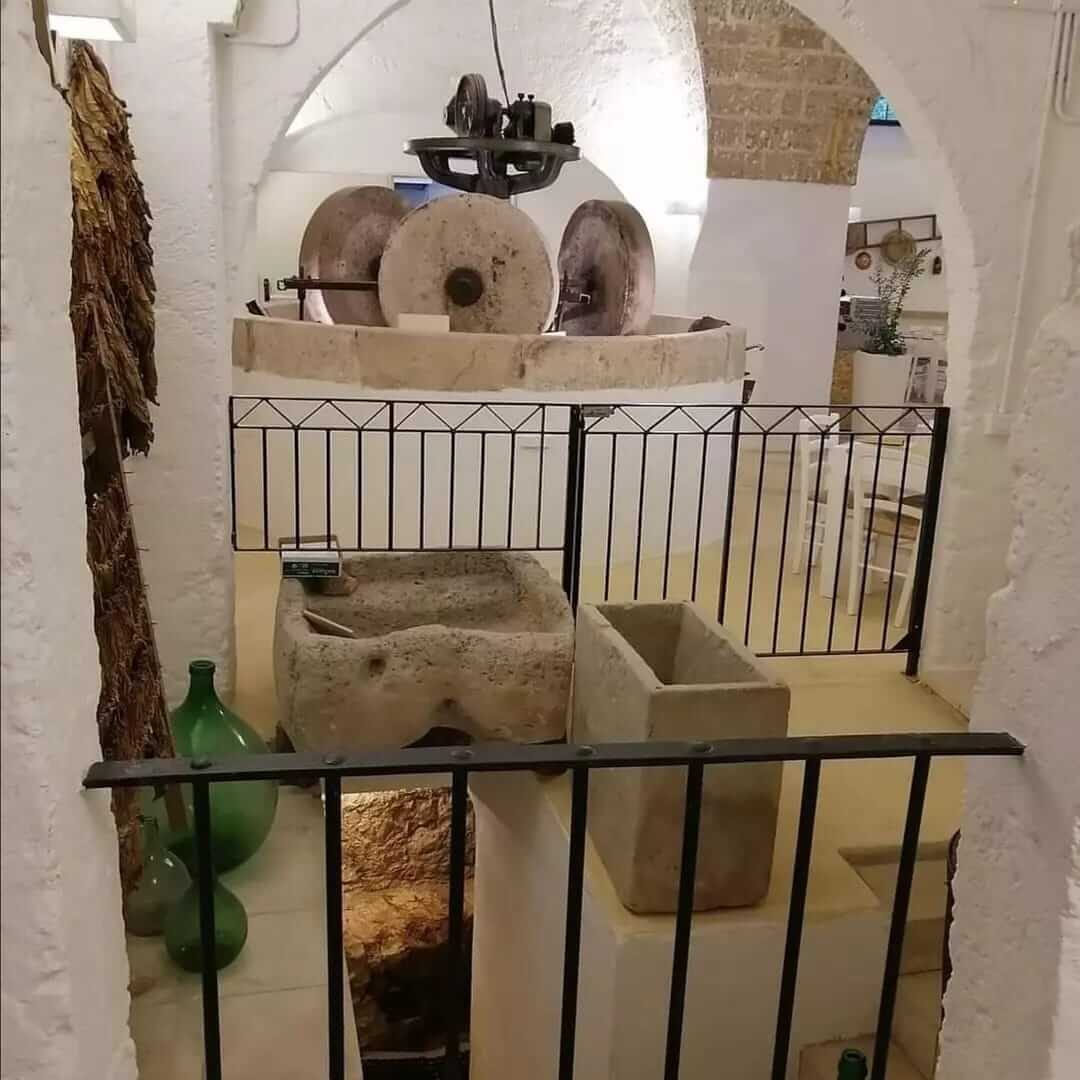 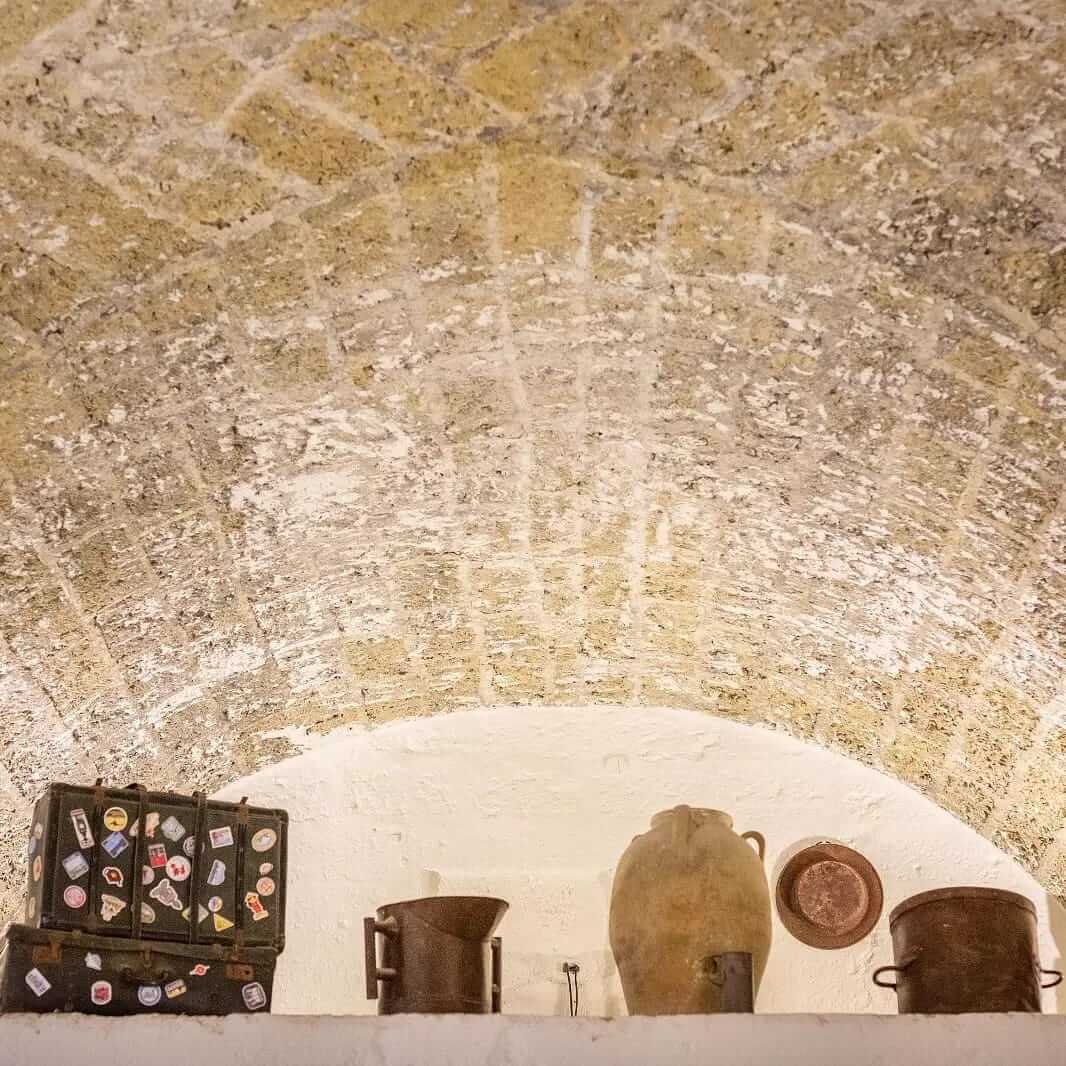 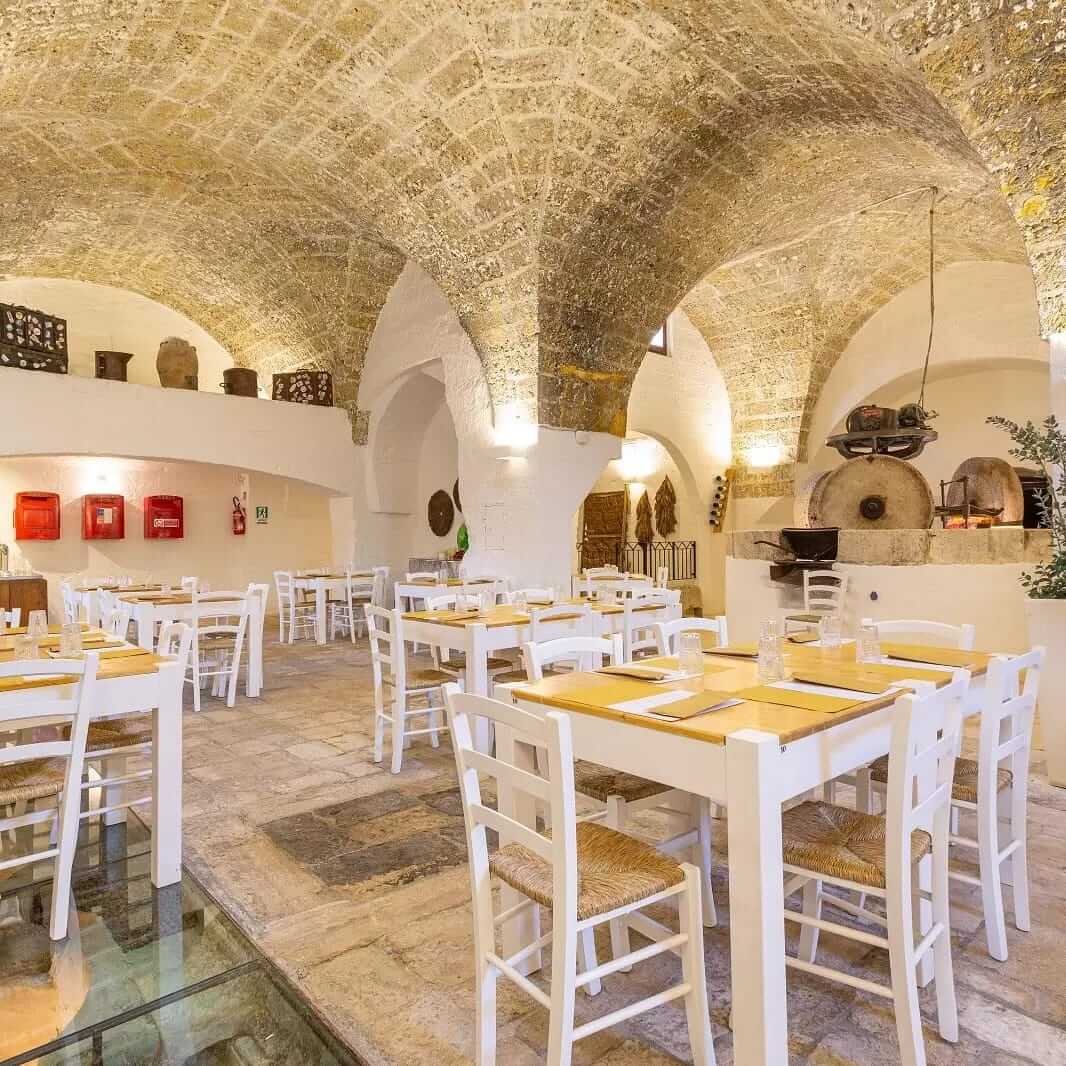 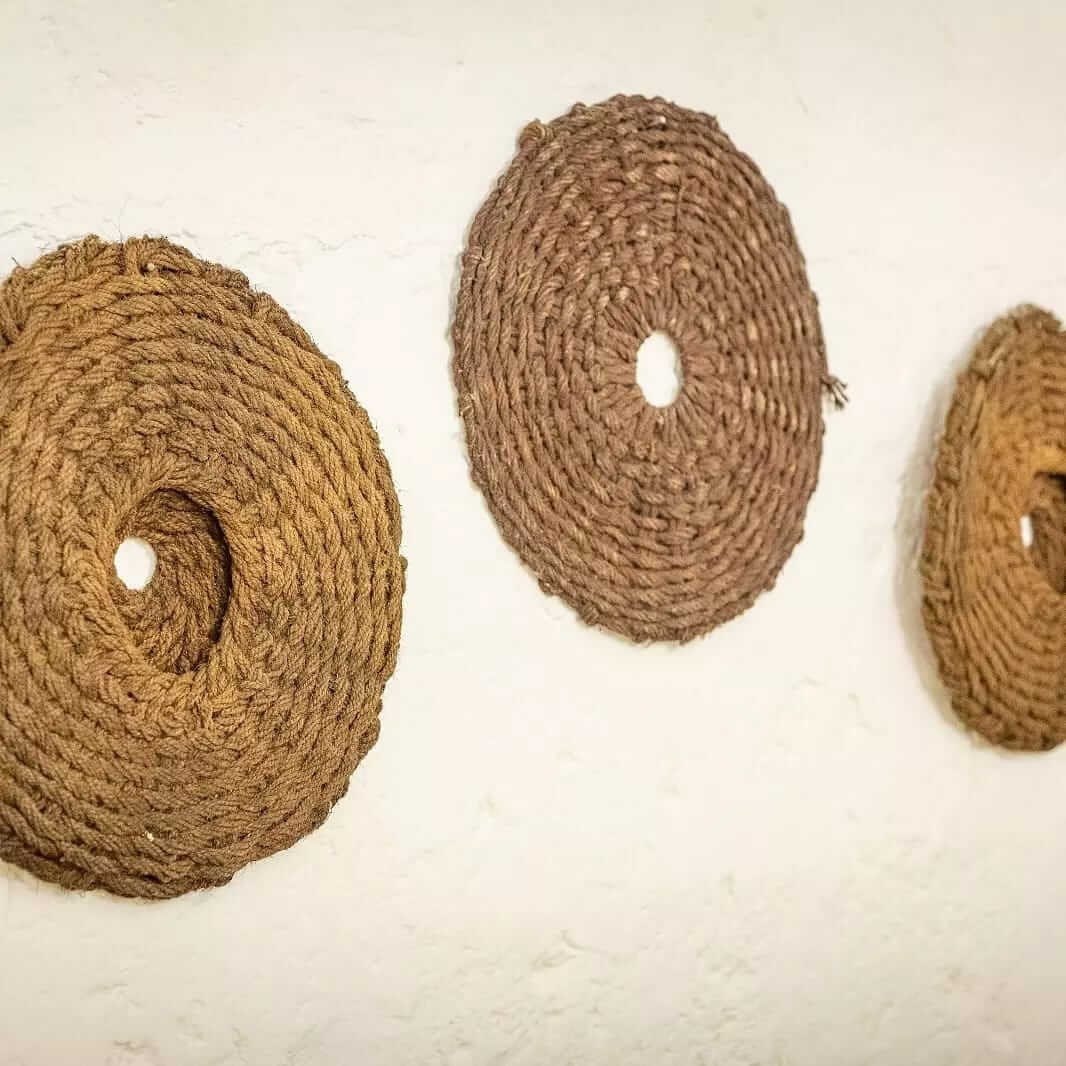 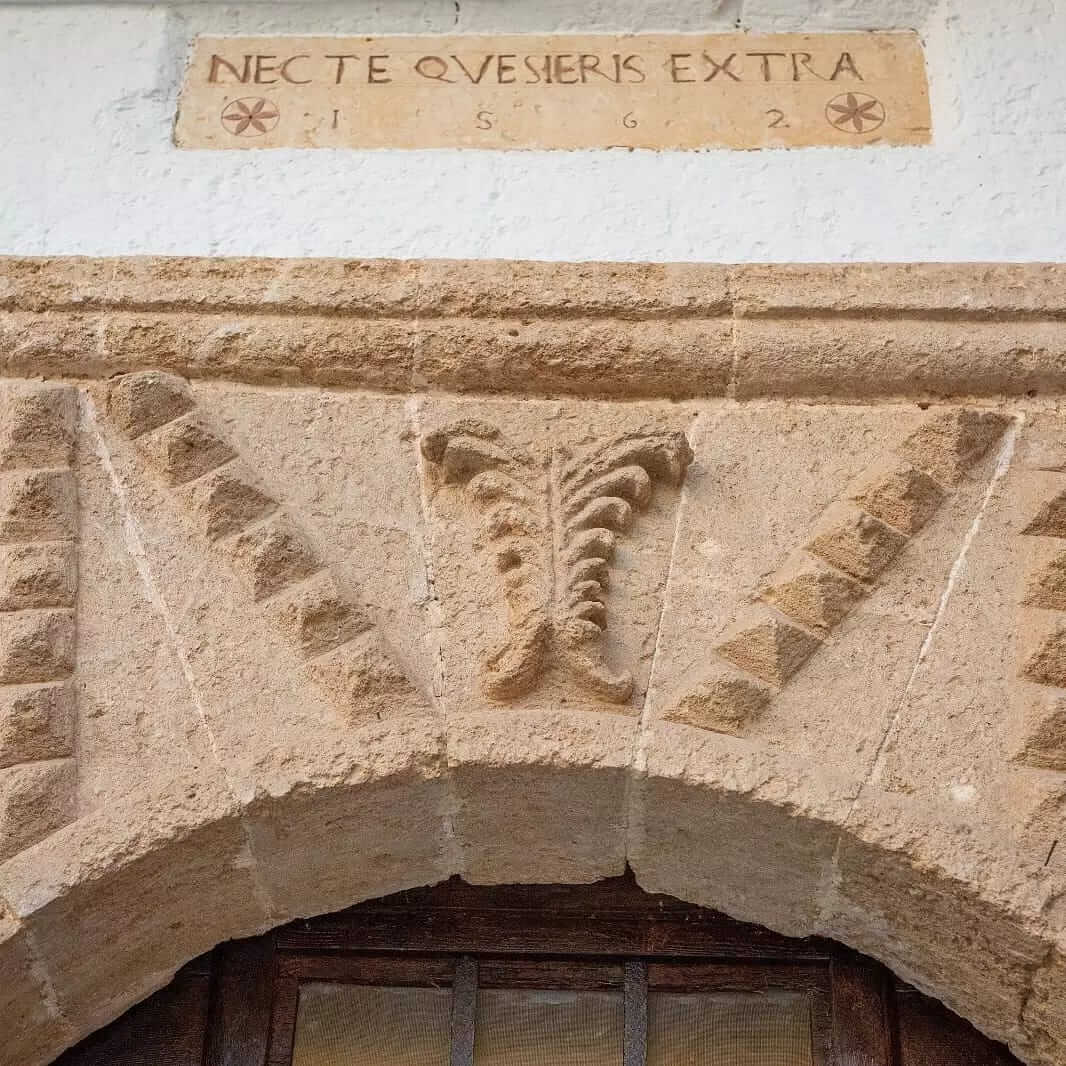 Today we can see through the entrance with the small door placed on the massive wooden door and the corridor, the large central hall with on the left a large 3-wheeled stone millstone and on the right flush with the ground under the glass the so-called “tubs” containers of collection and decanting of the “Santina” water and oil squeezed from the mixture of the olives through the “fiscoli” and the bases for the presses of the oil mill born in the early 1700s. Above you can see the mezzanine from where the “Nachiro” in charge of the mill could control the whole mill during its rest hours.

In the room on the right, with the barrel vault, the olive oil for trade was kept in the “pile” of Lecce stone.

A staircase leads to the granaries and the Hypogeum oil mill dating back to the early 1800s and the second to the 1900s. Currently not open to the public as they have not yet been secured. In the first granary there is still present on the walls an earthenware plaster made from a mixture of lime, sand collected in the street corners after a few days of rain and fragments of earthenware. In the central area there are two wheels that formed the hypogeal mill made to turn by a bandaged mule of which the footprints of the hooves in the path formed around the millstone remained intact. Next to it there are two settling tanks, a collection pit for the santina and two bases of the presses all dug into the rock for the production of lamp oil destined for the English and French markets for the lighting of their streets. 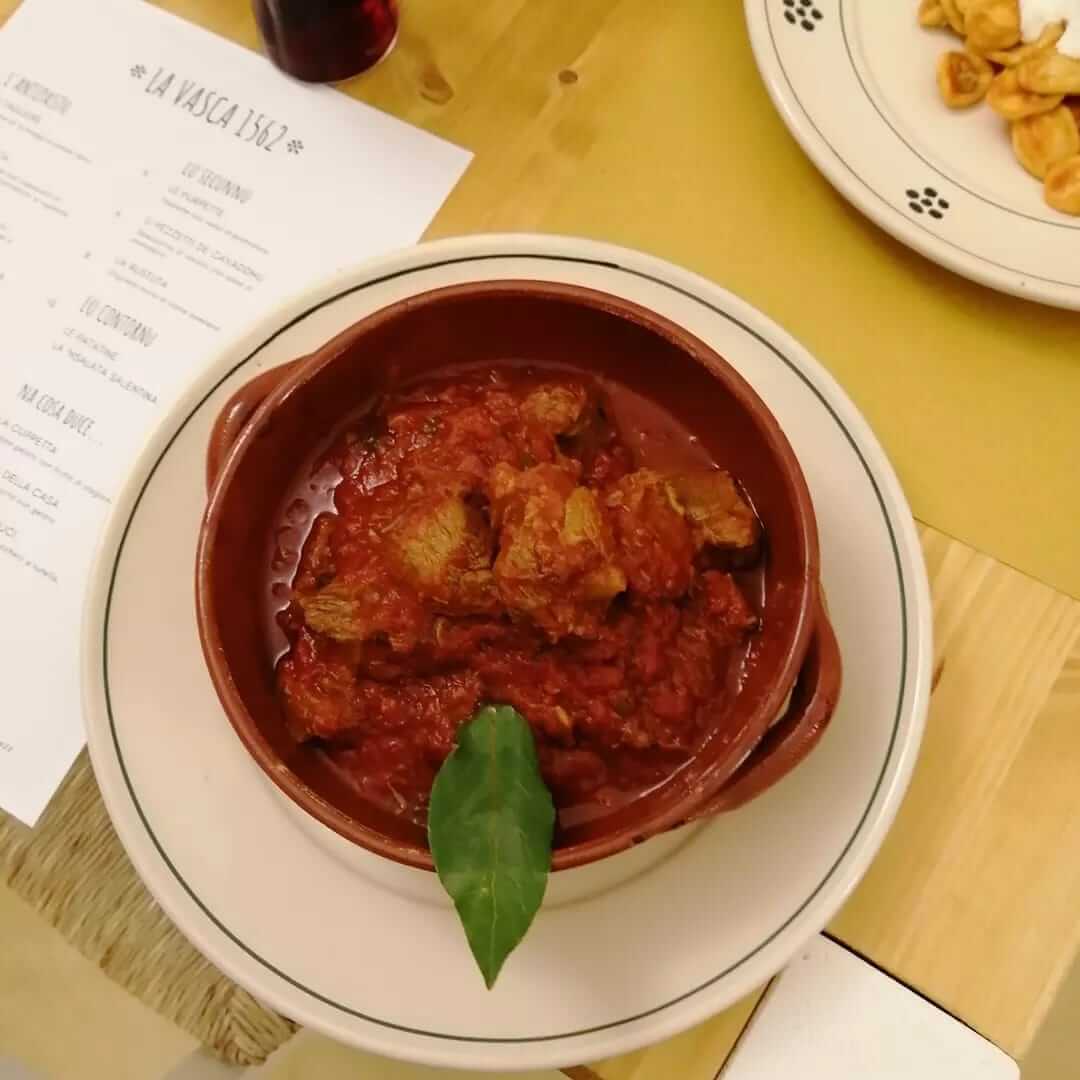 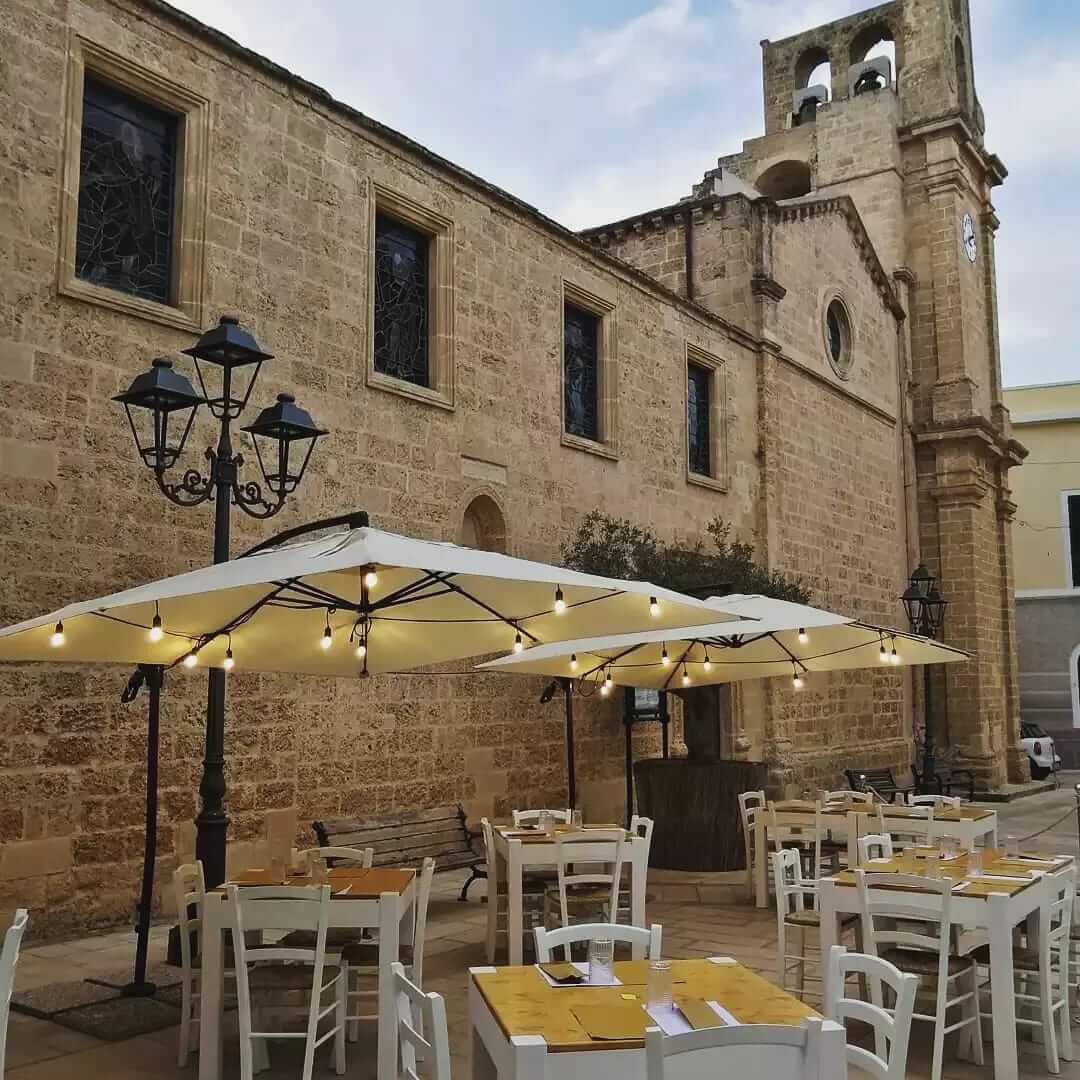 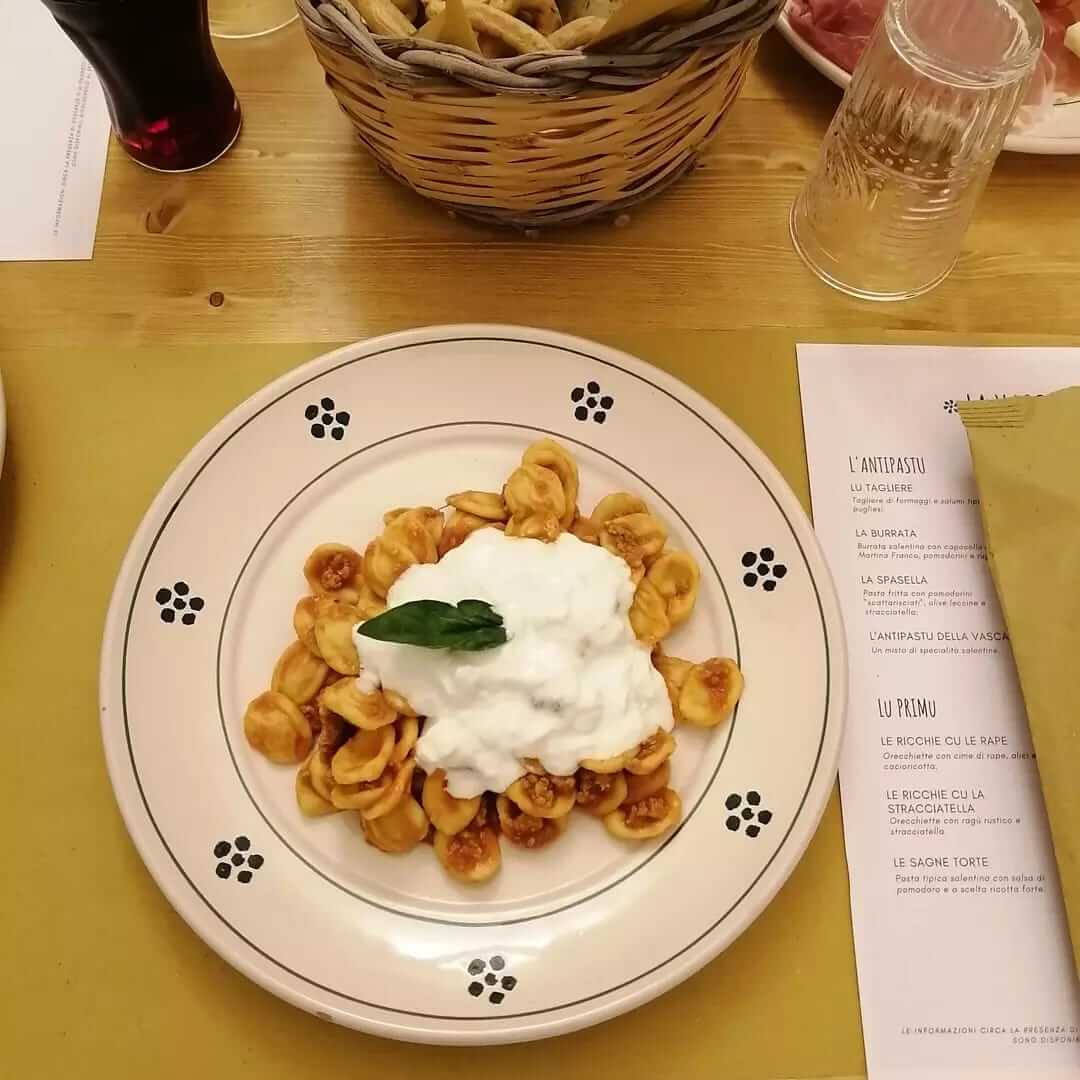